Finding the source of the Thames

A significant birthday for my brother was approaching, the kind that ends with a nought. I was wondering how to celebrate it. My brother likes walking but at the time I wasn’t fit so couldn’t walk too far. My brother like me enjoys pub lunches. At the time I was working on a project about the River Thames so I planned a trip to find the source of the river followed by lunch in the nearest pub.

Our journey involved taking the M4 west to Junction 15 then take the A419 to Cirencester. We took the south side of the town’s ring road and took the A4299 to the village of Kemble. We parked in the railway station car park and got ourselves ready. 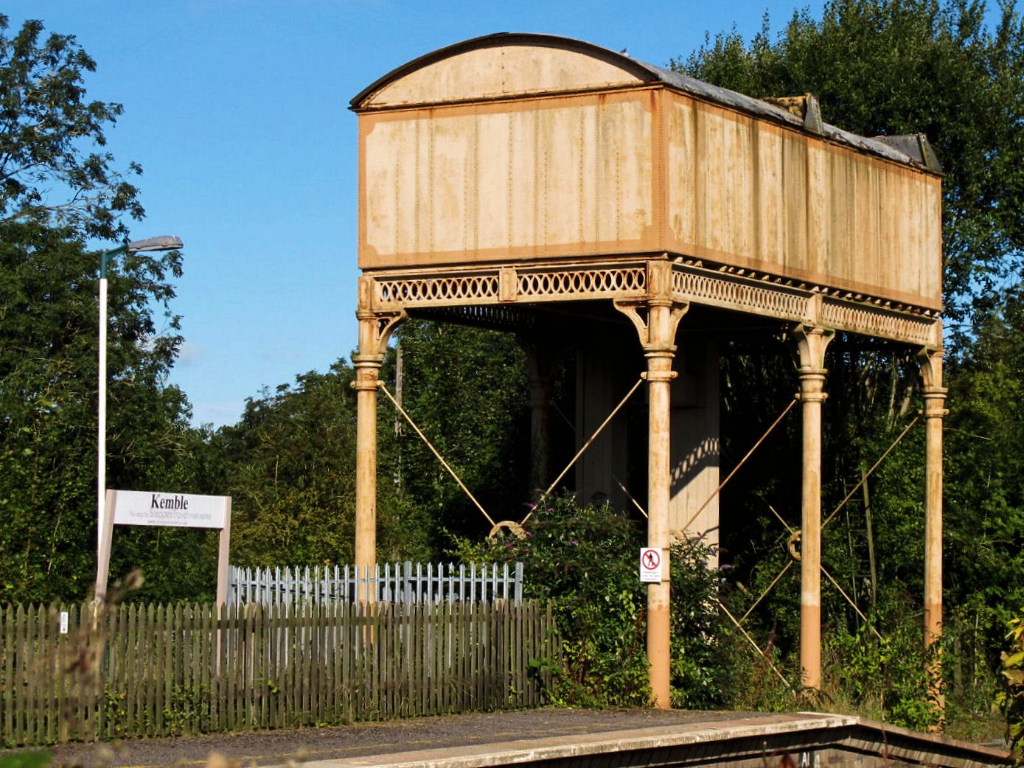 I took a few photos around the station and then we set off on our walk. My meticulous planning kicked in and I inevitably found myself completely disorientated and lost. We walked a little way along the road that runs entirely incorrectly ran north. The footpath was marked with a pole that had no arrows and due to my bad judgement we went past it. My brother was to remind me about this for the rest of the day, I suppose it was in case I forgot that it had ever happened, nothing at all to do with the motive of rubbing my nose in it.

We went back to the pole to re-orient ourselves. Luckily a lady walker asked if we were okay. I asked if the path led to the Thames Head to which she said it did. The pole, on closer inspection, had a very small badge on it that read ‘Thames Head’ so off we went.

Due to my general lack of fitness, my brother took to calling me ‘Katz’ after Bill Bryson’s friend and accomplice in Bryson’s novel A walk in the woods. In that book, Stephen Katz was over-weight and not at all prepared for a walk along the 2,200 mile Appalachian Trail.

Dennis called me Katz at every opportunity and there was nothing I could do about it. I would have argued with him but I was far too busy concentrating all my skills on sweating and wheezing. I found out that I was quite an expert. After some time the wheezing was replaced by a level of heavy breathing that could get a person arrested under certain circumstances especially on the phone. 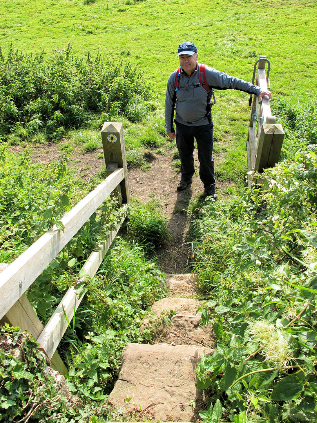 In spite of this suffering, I was actually enjoying myself and, although the walk was no challenge to my super fit brother, I think he was enjoying it too. It was a very sunny and pleasant mid-September day and we were walking across pasture fields in a typically rolling English patchwork of mixed farmland divided by hedgerows and small clumps of trees. 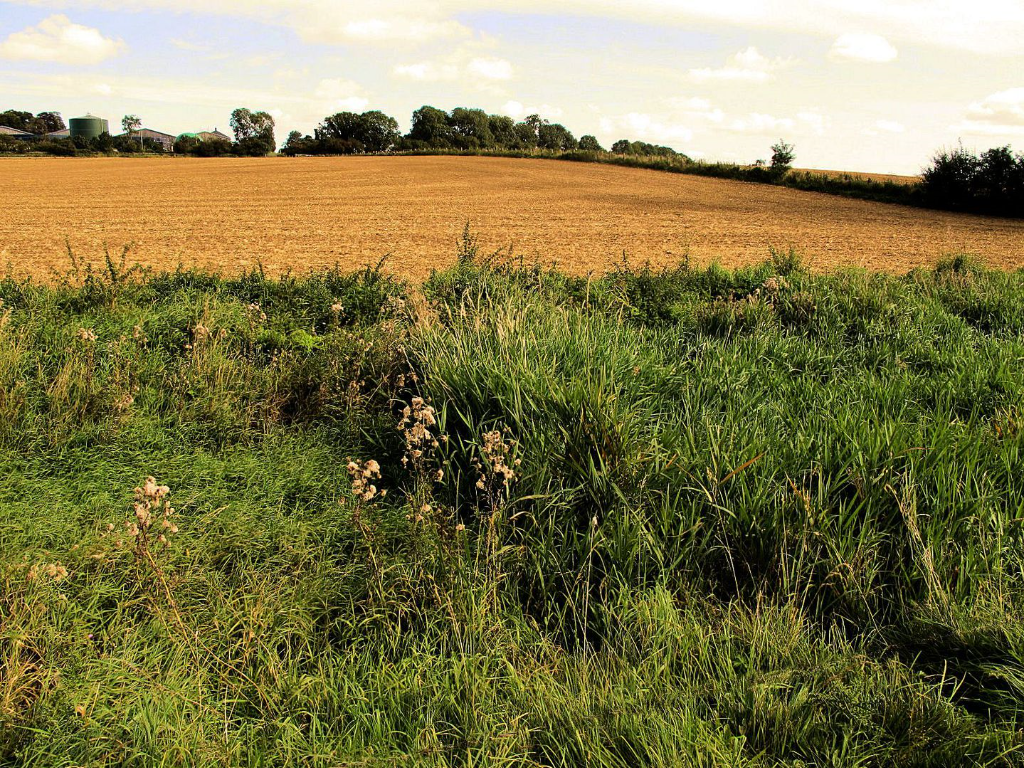 The path runs through a pasture field parallel to a ditch which is a tributary to the Thames. The field had a plethora of cowpats especially laid there for us to avoid. At end of the field is a bridge to cross the ditch to go north parallel to the Thames. We then crossed a very poorly-maintained sty to enter a field with even more cowpats and the added hazard of very bad divots caused by cows when the field had been muddy. The ground was dry and hard now so you need to wear decent walking boots to avoid twisting your ankle. It would be impossible to cycle on.

We were pleased to see that the Thames was in water at this point and was quite broad, maybe 20ft across, no doubt due to a particularly wet summer earlier in the year.

We remained fairly faithful to path and after some time we went through a gate, climbed some steps to cross the rather busy A433 to go through another gate into another field. Soon we spotted the stone that marks the Thames Head. 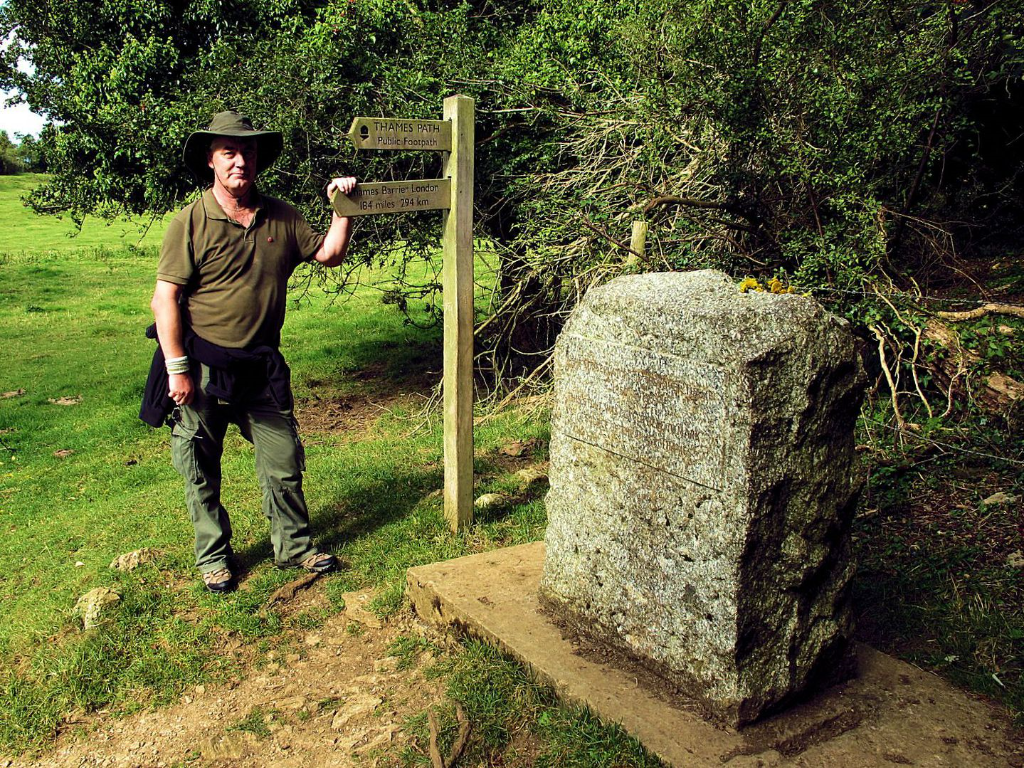 The official source of the River Thames. The sign informed us that it was 184 miles to the Thames Barrier.

Making our way back to the car we followed the course of the Thames to see where the water actually came out of the ground. We followed a well-defined V-shaped ditch across the field. The grass at the bottom of the ditch is kept short by cattle near the Head but it soon becomes scruffy longish grass as you walk along. A little further on, about a kilometre from the Head at OS grid reference ST98892 98516, the grass ended and was abruptly replaced by reeds and other water plants indicating surface water but the plants were so thick that we couldn’t actually see the water. The change between plants was so definite and went in a dead straight right angle across the ditch.

Further on, at OS grid reference ST98956 98446, a wall crosses the ditch and acts as a barrier to the water plants. On the other side was clear water with no plants. Four little ducts allowed the water to pass through. 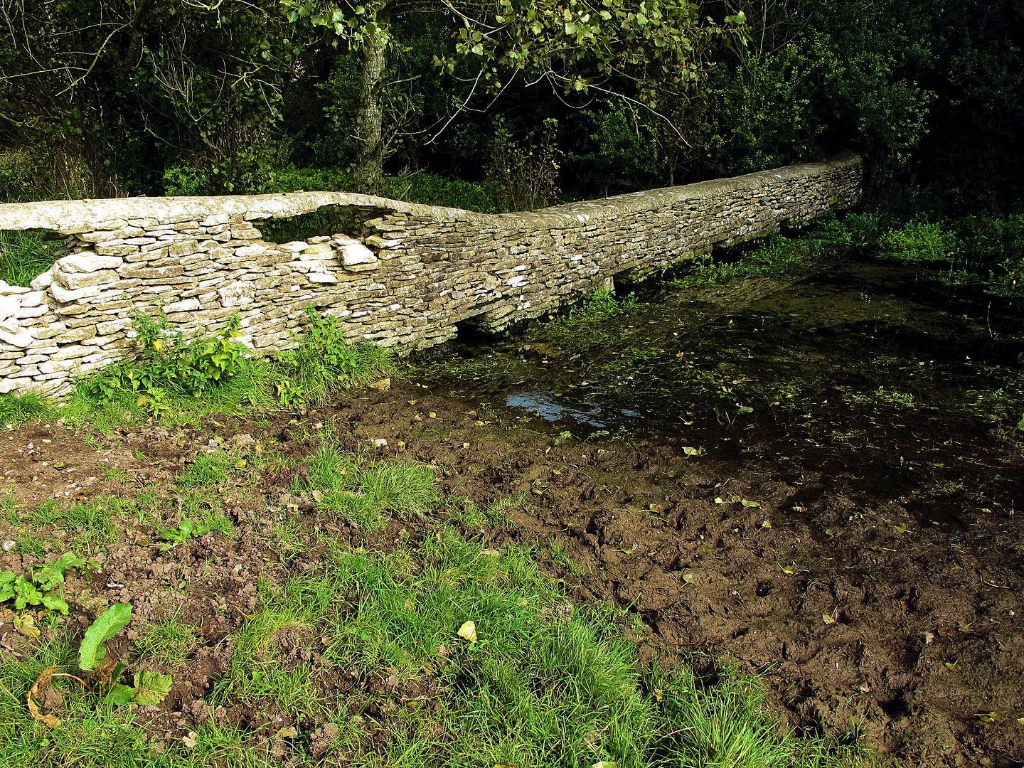 On the other side of the wall, reeds and other water plants conceal the water. This side is downstream and there are no water plants.

We got back to the car at about 11:50, about 1hr 40min after setting off with a round-trip distance 3·6 miles. A shorter route can be made from a small layby on the A429 road. We drove to the Thames Head Inn which is on the A433. 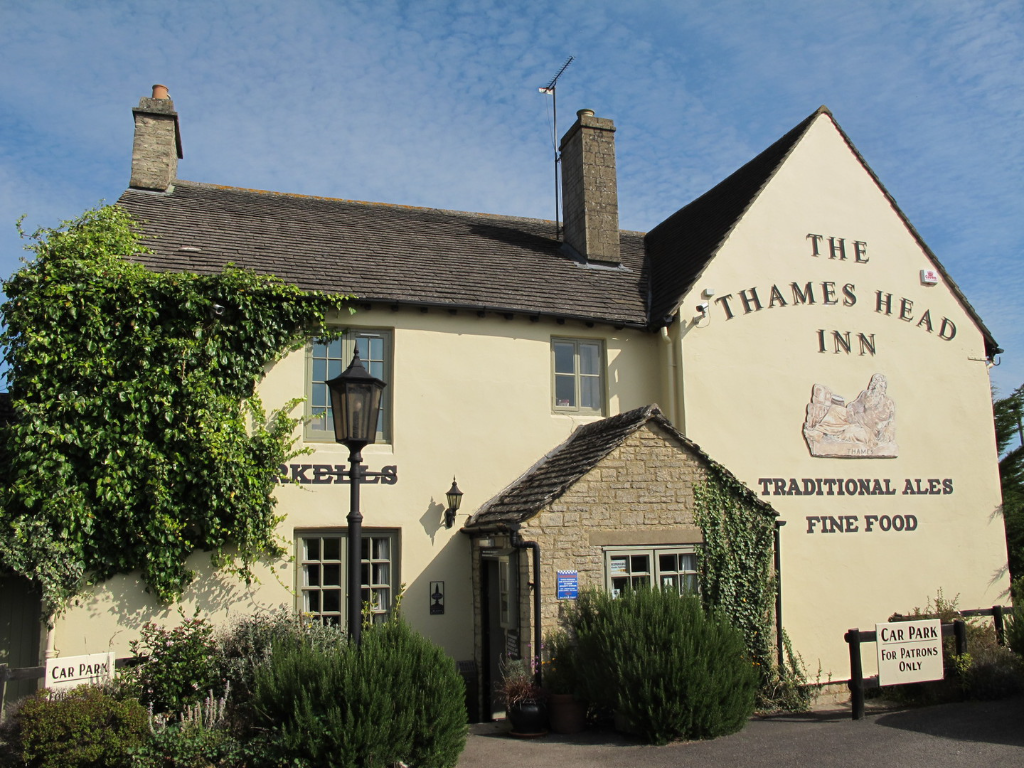 The Thames Head was quite nice. My brother asked for a Becks lager and I went for an Arkell’s real ale called Moonlight. The label on the tap had picture of a Lysander aircraft on it. There was story here but it was buried somewhere at the back of my head. I’ll research it when I get back home. We both went for bangers and mash with onion gravy and selected a sewing machine to sit at.

Yes, I did say ‘a sewing machine’. The pub had gotten hold of a few old-fashioned treadle sewing machines and fitted a table top to them. They looked quite good, not least because the tops were distressed and much of the varnish was worn out. The tops should never be renovated.

The meal was nice. Three large sausages lay atop a lump of smooth mash. The onion gravy was unusual but very tasty too. The Moonlight real ale was refreshing with a fruity taste. The meal came to just £26·90 for both of us. It was a very pleasant gentle day and, as it was my treat, Dennis didn’t have to get his wallet out so he was happy too. 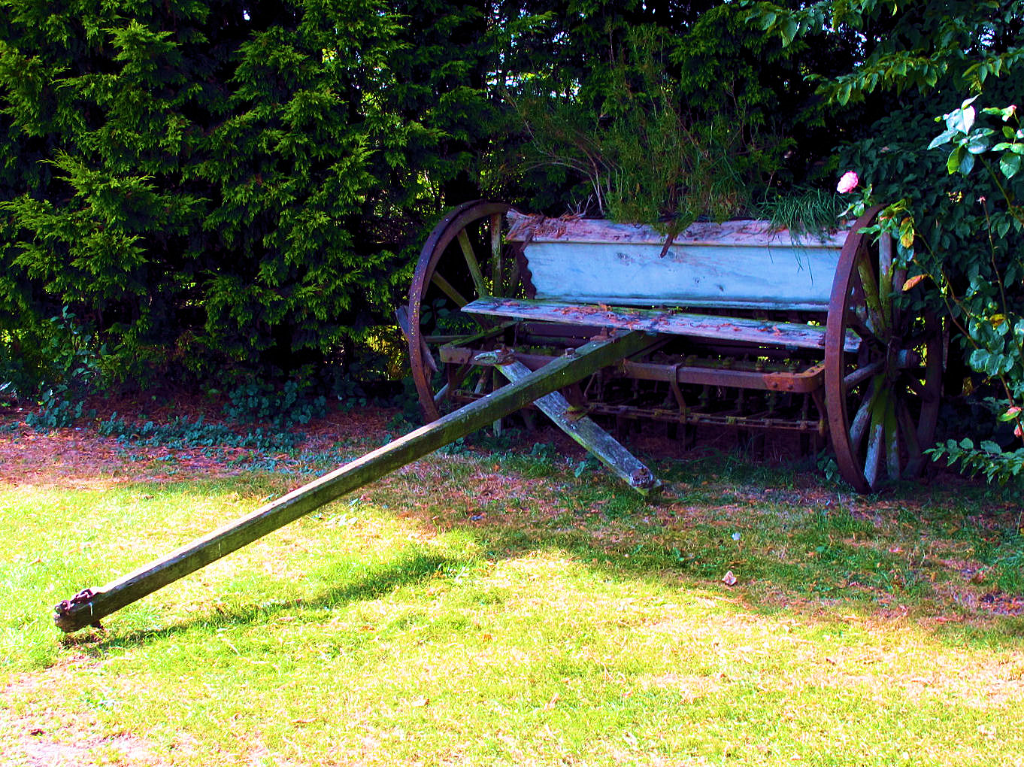 Old farm equipment in the corner of the car park,

I believe it to be an old seed drill

Moonlight – He landed by Moonlight

When I got home I found the story of Moonlight Ale which is named in honour of Peter Arkell OBE (1923-2010). Arkell was a director and later chairman of Arkell’s Brewery. A great-grandson of John Arkell, the founder of Arkell’s Brewery in 1843. Peter Arkell had been a pilot during the Second World War flying Spitfires and Mustangs. 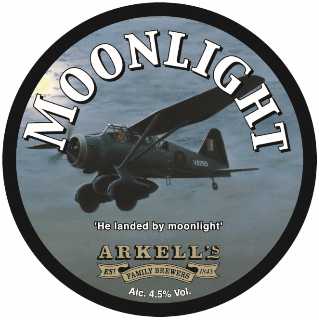 Later in the war he later flew Lysanders in support of the Special Operations Executive (SOE). With their short take-off and landing capability, Lysanders were used to drop and collect spies from remote fields in occupied France. These were hazardous missions not least because the pilots would fly by moonlight so that they could locate the landing site. It follows that if a pilot can see the field then he can surely be seen by the enemy on the ground. They flew low on mostly following rivers and also dead reckoning navigation

Flight Lieutenant Peter Arkell flew several such missions over France. Later on in the war he was assigned to Burma where he flew 35 sorties supplying troops of Force 136 behind enemy lines. On his last mission he crashed and spent a year in hospital to recover. He was then invalided out of the RAF. At the time of writing, Corgi toys had a production run on a model of the aircraft that he flew in Burma.

Designed by Arthur Davenport and Teddy Petter, the Westland Lysander first flew in June 1936 and was introduced in June 1938 in the Army co-operation and liaison roles. Later in the war it was used to drop spies in enemy occupied France and drop supplies to troops in the jungles of the Far East. 1,786 were built and the main users were The RAF, Indian Air Force, RCAF, Egyptian Air Force and USAAF. Lysanders were retired from the RAF in 1946.

Crew: pilot and observer or passenger

For Peter Arkell’s 80th birthday, the Arkell’s brewery commissioned aviation artist Gerald Coulson to paint a picture of the Lysander aircraft, serial number V9289, which he flew in Burma. The staff at Arkell’s Brewery secretly brewed a new ale and christened it ‘Moonlight’ with the caption ‘He landed by moonlight’.

I think that’s a nice feel good tale to end on – Cheers! 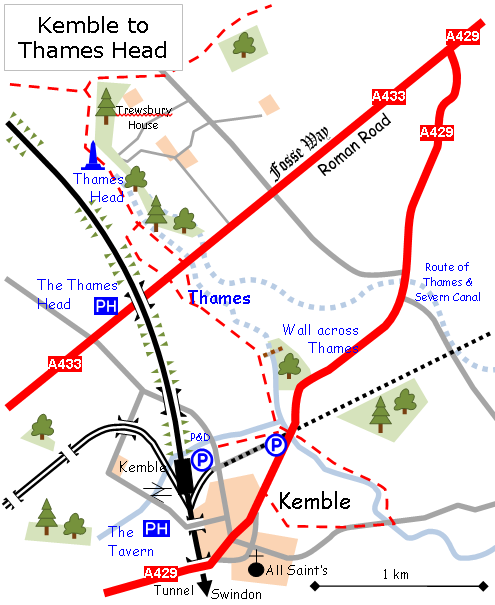